Immigration to New Brunswick with Immigration Canada PRO! At the moment, NBPNP includes four streams. All news about this program is available on this page!

The flag of New Brunswick 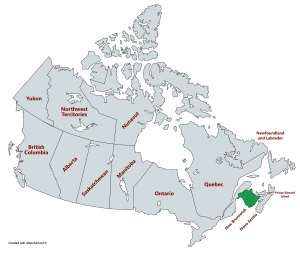 New Brunswick on the map of Canada

What streams exist in the British Columbia program? All information is summarized in a convenient table.

May 13 – New Brunswick published updates regarding AIPP and NBPNP

On May 13, 2020, in response to the COVID-19 and its impact on the provincial labour market, the province informed the public, that starting May 11, 2020, New Brunswick will only consider endorsement applications for Transport Truck Drivers (NOC 7511) from designated employers that have participated in the Atlantic Immigration Pilot (AIPP) in the last 18 month. Applications of candidates with other NOCs will be accepted only through the Skilled Worker Stream of the NBPNP. New Brunswick also stopped accepting applications from candidates that are living and working outside New Brunswick for occupations in the Accommodation and Food Services Sector both in the AIPP and NBPNP.

On February 20, 2020, New Brunswick has updated its list of designated employers. The updated list now includes 713 employers. In total, there are 2,428 employers in all four Atlantic provinces who can hire foreign workers in the framework of AIPP.

The government of New Brunswick has updated the official guide for the Skilled Worker Stream of the New Brunswick Provincial Nominee Program (NBPNP). To be eligible for the stream, candidates need to have a genuine full-time job offer, to be offered a competitive wage and to have the required certification for regulated occupations. Earlier, candidates had to score 50 points to be selected for the Skilled Worker Stream. The new requirement is to get 60 points out of 100. The minimum eligible age was reduced to 19 years. The new minimum language score is now CLB 4. New Brunswick has also changed the distribution of points for age, language, education, work experience, job offer, and adaptability factors.

On August 28, 2019, the list of New Brunswick employers taking part in the Atlantic Immigration Pilot Program (AIPP) has been updated. The list now contains 718 employers that have been designated by the provincial government. Since April 2019, the province added 257 new employers. In total, as of August 31, 2019, there are 2,264 designated employers in all four Atlantic Provinces that can hire foreign workers through the AIPP.

New Brunswick intends to triple the number of immigrants

On August 27, 2019, New Brunswick announced its plans to triple the number of immigrants to 7,500 newcomers annually by 2024. This represents about 1% of the province’s total population of 773,000 in the second quarter of this year according to Statistics Canada estimates. Another goal of the province is to increase the annual retention rate to 85% by 2024. The third main goal of the plan is a 2% annual increase in French-speaking immigrants, to reach 33% of the total population by 2024. In the last 4.5 years, New Brunswick accepted 18,275 immigrants.

The government of New Brunswick plans to add 130 nurses a year during the next decade. This was announced on July 30, 2019. The new strategy will help to overcome the nursing shortage in the province. The main focus of the strategy will enable attracting and accommodating foreign nurses and at the same time will provide better education opportunities for domestic students. New Brunswick officials said the province will need 1,300 new nurses over the next 10 years, based on the number of nurses retiring and the number of students who are graduating. The province is also trying to identify countries with nursing programs similar to the provincial standards. New Brunswick has already allocated $2.3 million in the 2019-20 budget to implement some parts of the strategy.

On July 26, 2019, New Brunswick Provincial Nominee Program (NBPNP) announced the opening of the Skilled Workers Express Entry stream. Candidates who have a valid Express Entry profile, are currently residing and working in New Brunswick, and who have a letter of employment are invited to submit their Expressions of Interest (EOIs). The employment of the candidate should be in NOC Level 0, A, or B. All candidates must meet the language criteria of CLB 7 in all four bands and have their Educational Credential Assessment (ECA).

Immigrants and international students are boosting the New Brunswick economy

A new report from the New Brunswick Multicultural Council (NBMC) says immigrant and non-permanent residents are becoming a larger part of the workforce and economy. Recent immigrants and international students have approximately 168 million annually to the provincial budget through taxes paid and federal transfers and have a direct impact on the GDP of 516 million. The province currently invests a total of 8.3 million in its Population Growth Division, which leads attraction, integration and retention efforts.  The Council says that number will need to increase given recent boosts in immigration. According to Alex LeBlanc, Executive Director of NBMC, “Immigration has increased by 26% from 2017 to 2018, so we will be expecting the province’s investment to increase.” According to the data by IRCC, an unprecedented 4,610 permanent residents came to New Brunswick last year.

The initial assessment of your chances is prepared based on the information that you provided to us in an online form. We offer a written assessment or a real-time consultation with one of our consultants